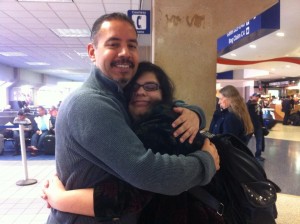 I was just listening to some music to try and get some inspiration for a post…and boy did I get it!

Coldplay’s song “Charlie Brown” came on and I just about lost it. I’ve been under a bit of stress lately (nothing serious…maybe I’ll share some other time) so I’m sure that’s part of it, but this song is a bit special for a few reasons.

As you may or not know, my youngest daughter Elizabeth (who everybody knows is my favorite) is away at school in New York. Now I’m quite OK with her being so far away, she’s happy and doing well and that’s what is more important. While she was here however, one of the things that we did was go to concerts together and two of the best shows we went to were a couple of Coldplay shows. If you’ve never been to a Coldplay concert I can tell you it’s quite an uplifting experience. And being there with someone you love to be with just makes it even better. We just had the best time.

Now this song is special because on this last tour they handed out wristbands to everyone in the crowd as you entered the arena. They kept telling everyone to put them on but didn’t tell us why or what they were for. As “Viva La Vida” died down the crowd kept singing until Chris Martin asked everyone to put their hands up in the air. And then…

And we all lit up and jumped and danced and let ourselves go…it was awesome! Everyone wants to belong and in that moment we all felt like we belonged. And we were part of something bigger than us and we were there together and we were happy and we were crazy and we were having a great time!

When I hear this song that’s what I remember – being with Elizabeth and being part of something cool…and I long for that again in the midst of everyday’s stresses. It helps to get me through sometimes. I sometimes tell people – “It could be better, could be worse…but it’s not as bad as it seems”…and times like that are what makes me realize that it really isn’t as bad as it seems.

You can never go back though…but you can hold it in your heart forever. Good times…great times.