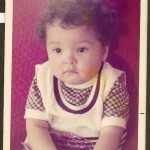 This post is about a person who’s been in my life almost as long as I’ve been in my own life. He’s a cousin who’s 5 years younger than I am. I’ve always been very close with all of my cousins (something that I think is lost with the younger generations) and there is one on either side of the family that I have been particularly close to. On my Father’s side of the family is Frankie. On my Mother’s side there’s Joey. 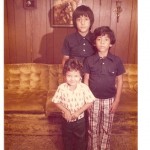 Not being so much older than Joey I seriously cannot remember a time when he wasn’t around. We spent a lot of time together, mostly at our Grandma’s house. I have a brother that’s 4 years older than me, but Joey is the first born in his family. That being said although we grew up in the same generation we had somewhat different experiences in life.

While I had an older brother to beat me down, he was the oldest (of four eventually) and so would end up beating down his younger brothers. As such, he was a bit more confident in life than I was. And that was always something I admired. 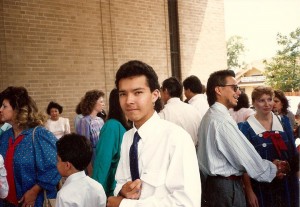 He wasn’t just confident but cool as well. He was both class clown and class president. He would eventually be student body president in high school. Throughout our childhood we would often be together mostly because our parents through us together but it always seemed that we mostly enjoyed our time together. We went to California together on a couple of occasions to stay with our aunt. And when his family lived in a little town named Quanah I would stay there for several weeks in the summer. We almost never fought, so in that sense it was better than being brothers.

Eventually we went off and lived our separate lives. He was, I believe, the first of our generation of the family to graduate from college. He would go on to manage a Crate and Barrel, but when he decided that wasn’t really what he wanted he went back to school and is now a high school teacher. A very good AND cool teacher I might add.

He’s always seemed more mature and responsible than I am…something that I admire. He’s a pretty cool big brother to my other cousins and I think there are more than a few cousins in both side of his family that look up to him. He’s always been bold and fearless. Seems like he’s been in a band ever since college. Taught himself the drums, bass, and guitar.

As you can see from tome of the pictures I’ve posted he’s been quite fashion forward.

Call him Joey, JoeMan, Joe, Joe Cool…he’s my cousin and I admire and love him.