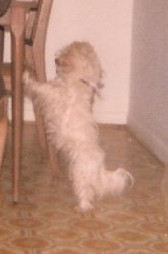 That was the name of my most favorite dog I had while growing up. She was a mutt and as most mutts tend to be she was lovable, cute, loyal, and a good friend. There are many stories I have about her and two in particular come to mind whenever I think of her. Beginning with her name: “Hey Kid”

It was the summer of 1978 and my parents were out shopping at the now non-existent North Town Mall. This mall was located on the north east corner of the intersection of Forest Lane and Webb Chapel Road in Dallas. It was June of that year and much like it has the last few days it seemed like it had been raining for 3 straight days.  As my parents were leaving the mall the rain was pouring down. My father was driving his Chevy Chevette towards the exit on the Forest Lane side of the mall when my Mom noticed this skinny brown dog just sitting in the middle of the parking lot with the rain just pouring down on her. My Mom said she had never see a sadder sight. 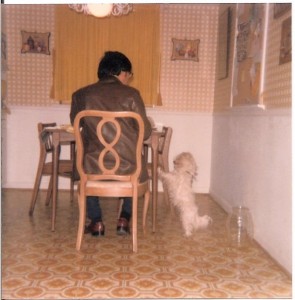 My Pop stopped the car, my Mom opened her door and through the pouring rain she yelled out “Hey Kid!” And just like that the dog ran into the car and home she came with them and home is where she stayed until she passed away.

She was with us until 1986…except for one year, which brings me to the second story bout Kid.

It was the summer of 1982…around August of that year. I went down to Houston for a soccer tournament with my team and was gone for a long weekend. Upon returning I expected to be greeted by Kid but she wasn’t there. My Mom broke the news: she had apparently run away. They had let her out in the backyard one day and she didn’t come in when they called her. They looked to make sure she hadn’t fallen in the pool and all of the gates were closed. It was a mystery. We lived near a busy street so I was afraid that maybe however she had gotten out of the yard that she had gone out into the street and been hit by a car. I looked for her for a few days but to no avail. Perhaps someone had picked her up much like my parents had and she was fine with them now. I was sad but I held on to the thought that she was OK and just not with us anymore.

Fast forward to July of 1983. My Mom is cleaning the house one Saturday. I’m out playing with my friends all day. It’s been almost a year since Kid’s been gone and I haven’t thought about her in a long time. I came home around 6 that day…and who should greet me when I walk in the door? Kid!!!!

Where? How?! Then my Mom tells me: she was cleaning house, washing the window in the front of the house when she looked up and there walking up the street towards the house is a little white dog. The dog just trots down the sidewalk in front of the house and then turns up the walkway leading to the house. My Mom goes to the front door and opens the door and then opens the screen door and like nothing had ever happened, Kid trots right on into the house and hops up onto the couch and curls up. She stayed there until I came in and she got up and greeted me.

We never found out where she had been. We never knew why she left or why she came back. I once wrote a story about her adventures that year she was gone. I like to think she came back to be with me, but she was just a dog. A pretty cool dog.