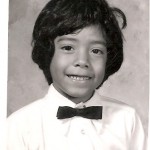 So a few weeks back I forgot to post and I brought in bagels I think for the group and then I continued to blog. What’s missing from all that is the post I never made. Do you remember that time when I said in my very first post that one of my goals with this “Post every week and be held accountable” thing was that I would have at LEAST 52 posts at the end of the year. So in order to do that I have to make up the post I missed…this is that post!

What is this missing post going to be all about…well I’ll tell you – the year was 1975. It was summer and I was staying with my cousin’s the Vega’s, Michael, Timmy, and Denise. They are actually my Mom’s cousin’s but all of our families back then were so large that they were closer in age to me than my Mom. And so we would hang out a lot and when they moved out to Plano I would stay with them for a week or so in the summer. I was 8 years old and the times were different then. We would wake up and then just walk to the 7-11 and get a slurpee and some twinkies for breakfast. Then we would hang out in the alley ways and ride bikes around for a bit. When I think back on it, it’s kind of  cool how we could, and would, fill our days with doing absolutely nothing and feel like we had done so much by the day’s end. There were some neighborhood kids we would play baseball or soccer with and then head back to the house for lunch.

And THEN…we would go to the theater for the afternoon showing of an old movie…usually some B horror flick. The first one I can remember, and for some reason the one that has always stuck with me, was “Godzilla vs. The Smog Monster”. Even though I missed it as a kid this movie was an obvious morality play on how humans are ruining the earth. I just wish the “save the earth” movement was as entertaining today! Anyways…I didn’t get the message OR see most of the movie…because I had my eyes covered most of the time. I watched the majority of the movie looking through my fingers. I remember it being weird but…

The other thing I remember about that summer was staying up late and watching even worse B horror flicks on late night television: “I Was a Teenage Werewolf”, “The Incredible Shrinking Man”, “Abbott and Costello meet Frankenstein”, “Creature from the Black Lagoon”. I lost a lot of sleep that summer…I wish I could do that again.