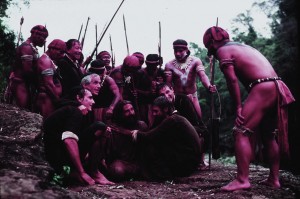 I find myself more and more seeking to calm a restless heart these days. Where there has been stressful pain I hope to cause serenity. I have often thought that the closet we might find ourselves to God, to the divine, is only in two ways – to procreate…and to forgive.

Forgiveness should be a reciprocal act…given as a gift to be returned as a gift as well. I think the one who has been asked for forgiveness has as great an ability, and perhaps responsibility, to take the penitential act and forge it into peace which can then be bestowed upon the sinner as both grace and simple kindness. This does not bind the actors however, as the acts should be totally unselfish and without expectation. They may never see each other again…or they may be tied to each other, but that is only for the actors to determine.

In the movie “The Mission”, the character of Rodrigo Mendoza is a slave trader who through a series of incidents finds himself converted and in seeking redemption is lead back to the very people he had captured into slavery. He returns to these people, high in the jungles of Portugal, dragging his tools of war. He in fact expects, and indeed almost desires, to be killed once the natives see him. He seeks the solace of death as penance for his sins. He instead receives the forgiveness of God and the redemption of his restless heart…