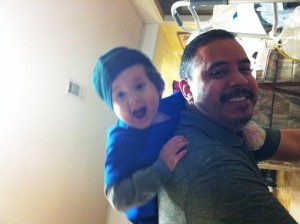 So I am now going into week 5 of my 6 to 8 week recovery from my concussion…and this week has been a good one. I was a little frustrated with the headaches and stomach pains going into this week but both have subsided both in occurrences and severity. So that’s a good thing.

I was able to get over and visit the Bernbaum’s while their sister, and my longtime friend, Tracey Bates Leone and her daughter Mattea was in town. I was still feeling a little under the weather while I was there so I didn’t get to play in the b-ball game but I did shoot a round of H-O-R-S-E and just have fun while I was there.

A couple of weeks ago my daughter got into an accident while she ws borrowing one of my cars. Thankfully it was a low speed collision with a high impact barrier so she was perfectly OK. The insurance covered everything and I’ll get the car back within the next week.

Over the weekend my refrigerator started clanking like an old steam locomotive. I knew it’s time was coming near…I thanked her for her many years of service and then pulled the plug. I’ve been able to get by so far without a replacement…I’ll get one in the next week or so, but it hasn’t been that bad living without cold stuff.

I had dinner with Jessica and JD the other night. I never thought I’d love anyone as much as I do my daughters…but grandchildren can make you rethink those kind of things.

I had the “check engine” light come on in the Cabrio a few weeks ago. The code that came back was possibly going to be a bit of a charge. I went under the hood myself, refit some vacuum lines and…”check engine” light is now off, code clear.

I’ve got a good feeling about the Cowboys games this week. Cowboys 24 – Eagles 14 is what I’m thinking.

So I guess my point is…life continues on here in North Texas…mostly as usual.

I’ve got no complaints!