In my lifetime I have been lucky enough to be present at some great sporting events. Here are the top three with my memories of each. 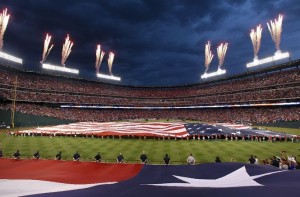 The Rangers were in the ALCS for the second straight year and nobody was mad at Josh or Ian yet. This was a team that was better than the rest this year but they would come up short in the World Series. But we didn’t know that yet. I got my tickets at the last minute on StubHub and ended up with two seats in the left field lower deck just two rows up. I paid face price for them so it was all good. I took my sister who had become quite the sports fan in the last few years. My first memory of this game is the two extended rain delays. My sister and I ended up talking and joking and just having a good ol’ time during the delays. The second memory was that despite the delays this was a well played and exciting game that would set the tone for what would end up being the Rangers second straight AL crown. The Rangers went up 3-0 before the first long rain delay. The Tigers would get it to 3-2 after the game resumed but that’s as close as they would come. Neftali Feliz would come on in the ninth and allow the first batter to get a single. But that would be all he would give up as he struck out the next three batters to get the save. 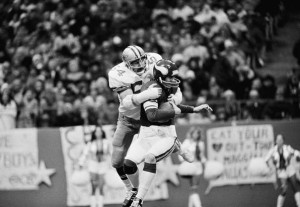 This was the glory years for the Cowboys – Staubach, Dorsett, Pearson, Martin, White, Too Tall…the was America’s Team at it’s finest. Minnesota limped into the playoffs winning the Central with only a 9-5 record (this was the last 14 game season for the NFL) and then slopping through the “Mud Bowl” over the superior LA Rams 14-7. The Cowboys on the other hand had the best record in the league at 12-2 and had rolled over the Bears 37-7 in the playoffs. My best friend’s mother had gotten the tickets for us and his Dad took us. It was a cold New Year’s day 1978 and it was great! The game was never really in question as the Vikings couldn’t hold on to the ball and the Cowboys turned every turnover into points. We were in the upper deck of the old Texas Stadium but we had a ball. In the third quarter a fan who was wearing a Santa Claus suit would catch fire in the stands…quite a surreal scene. Tony Dorsett scored a touchdown late in the fourth quarter to seal the game and the crowd was over the top for the rest of the game. We stayed in the stands until nobody else was left just soaking in the victory. The Cowboys would go on to win the Super Bowl two weeks later…I was at my best friends house to watch the game.

This was perhaps one of the most exciting sporting events ever…and most people probably don’t know about it. There were several subplots – Tacoma was a supremely superior team with one of the greatest strikers in league history in Steve Zungul. The Sidekicks had actually folded in the off season only to be resurrected in large part by the fans. The Sidekicks had gone down in the series 0-2 and then 2-3 coming into this game. I was there with my then wife who was 4 months pregnant with our first child. The game was at the now non-existent Reunion Arena which was sold out and rocking. The Sidekicks went down 1-2 and then scored a totally unexpected but beautiful short handed goal to tie it up just before halftime from Kevin “Smudger” Smith that sent the crowd into a frenzy. The fourth quarter was a goal fest with Zungul scoring with 40 seconds left to tie the game. After being so close it was unnerving to have victory snatched away. The game would go into double overtime before it would be settled.

Sudden death games aren’t as serious as the team might make them sound…but if you are a fan it can make you feel like you’ve aged a lifetime. The season would be over with a Tacoma goal and they would get several chances and come close including on what would be the final sequence of the game. Tacoma would get off a couple of shots and Zungul would go down in front of the Dallas goal. I thought for sure a foul would be called but the play went on. Mike Uremeovich would take the ball up to midfield and then lay it off to his left to Mark Karpun. With a defender charging across him I thought he had missed his chance when instead of shooting he pulled the ball back inside with the defender running himself out of the play. Karpun then slotted a shot nearside of the keeper (which never should have worked) and just like that the longest game in MISL history was over. The crowd went wild and once again we stayed until they kicked us out. We were exhausted…and we were happy!