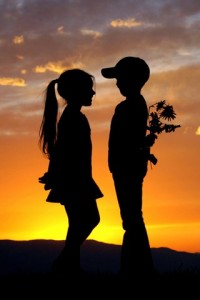 I was observing my grandson the other day as he was playing in the Chick Fil A play area. As I have noticed ever since I have seen him in these situations, he gravitates to the girls that may be in the area. It’s not that he won’t be sociable with any boys, but if there are girls around he will choose them to play with first. And he will always choose the older ones first as well.

One thing I noticed in particular this day was that he was infatuated with one particularly cute little girl so much so that he was outright flirting with her to the point that he followed her back to her table and in front of her father he continued his pursuit of her. He’s got brass ones, I’ll give him that!

Which brings me to my own story – now I’m not sure if there was something in particular that he saw in this little girl that would make him so bold as to disregard the fact that her father was RIGHT there, but it just got me to thinking about when I was around his age and my interactions with the fairer gender. For me at the time it was hair. The longer the better. Curls were nice and waves made me swoon as well. I just had it in my mind that a girl was prettier with long hair. And so…

St. Monica School, 1st grade homeroom. It was September of 1972. Her name was Laura and she sat in front of me. Long brown, shiny, wavy hair. She was the most beautiful girl that had ever sat in front of me in my entire life! She turns to me and declares, quite loudly for everyone to hear, “YOU…are my boyfriend!” How could I deny this beauty in front of me?! So I shrugged my shoulders and said “ok.”

And so began our week long relationship. We sat together at lunch. She would watch me as I played football or soccer at recess. I would wait with her after school for her Mother to pick her up and then she would wave to me as she left. I picked some wild flowers on the way to school one day and gave them to her. She bought me chocolate milk…cause she knew it was my favorite. Everything seemed fine…until that fateful Monday.

She came into homeroom as if nothing had happened…but I was unnerved. She had gotten a haircut…she had gotten them ALL cut. I remember thinking her hair was shorter than mine! I was heartbroken…and shallow…I was 6. I was through. I didn’t let her down easily…I didn’t even give her a chance to explain. I called it off and went my way.

I’m a lot more forgiving now…it’s not a deal-breaker…but I still have a thing for long hair. I’m a lot older than 6 now, and a little wiser.