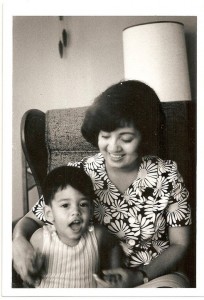 2/4/2011 – It’s a Friday, the weekend of Super Bowl XLV. The night before I had actually attended the official Super Bowl Committee party at Billy Bob’s in Ft. Worth. The entire area is engulfed in a winter storm the likes of which had not been seen in the area for decades. It took me 3 hours to get home from the party. Most people had been iced in for the entire week. My employer had already shut down the plant for the week but I wouldn’t have gone in regardless of the weather. On this Friday morning I realized that my mother was only days away from the end.

I was only a couple of years removed from this scene, having been with my father in his last days. When I checked on Mom that morning I noticed that neither one of her colostomy bags need to be drained. Her kidneys are failing. For the last week or so she’s been sleeping most of the time. She’s tired. She’s eating less and drinking less. But this is the first time I haven’t had to drain the bags. I call the home health care doctor and she comes over that afternoon. She confirms what I already know and orders hospice to take over. I call the office at St. Monica’s and let them know the situation. It’s not eminent but soon I say…a Saturday visit will be fine.

Fr. Jason comes over Saturday morning, not too early, around 10:30. We sit and talk a bit. He comes to the realization fairly quickly that I am more than aware of the situation and that I am at peace with it all. He seems a bit relieved by that. The house is quiet as we go into Mom’s bedroom. We walk in quietly and I wake her to let her know Fr. Jason is here. He asks her permission to perform the Sacrament of Anointing of the Sick (Last Rites). Please she says. He begins with the Sign of the Cross…she signs herself, smiles, and then almost immediately goes back to sleep. She sleeps beautifully through the entire sacrament.

Later Saturday afternoon, I call my daughters and my aunt (Mom’s sister) and invite them all over to watch the Super Bowl…and that they should REALLY make a point to make it over.

I had hoped that I might be able to get Mom out of bed to watch at least a little of the game and to be with everyone for a little bit but I can tell that she won’t be up to it so I don’t press the subject. Everyone’s over and we are all walking in and out of her room and watching the pre-game show, things are fine. While she’s not up to getting out of bed, the activity in the house perks Mom up a bit and she asks to have the bed raised. JennyG, my girlfriend and an excellent RN, is helping to take care of Mom while we watch the game.

At one point my aunt asks her sister if she wants some whiskey jokingly. That sounds good says Mom…well we don’t have booze I say but we do have beer! I’ll take that says Mom. I look at JennyG as if to say “Can we give that to a dying woman?!” but I actually say “Is that OK?” To which she replies (one of the most classic JennyG responses of all time) “She’s over 21 isn’t she?!” It is at this point I realize that I am ready to let go. Miller Lite coming up!

She’s too weak and unsteady and so JennyG offers her the beer, holding it up to her lips. “Ohhhh…that feels goood.” A good cold beer was just what the doctor ordered…so to speak. She’s been running a fever as her body has been starting to give out. The cold beer I’m sure feels good…like after having been working out in the yard during the summer. She take a few more drinks and then lets out a burp. Maybe that’s enough she says.

JennyG asks how about a root beer float? That sounds good says Mom. We order up a short root beer float and the girls laugh and get into the kitchen to make one. JennyG tenderly feeds her and she’s done before we know it. Order up another one! Down it goes. One more! Done! How about another? Yes thank you!

And so was the last meal Mom had on this earth. After saying goodbye to everyone that evening she would go to sleep for the next two days and then pass away on Wednesday morning, February 9th.