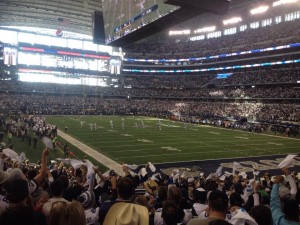 So another game to add to my “I was there” list…the NFC Wild Card game between Dallas and Detroit. January 4th, 2015…and what a game it was! Like most great games there was drama, controversy, great plays and a come back.

There were two guys from Detroit siting next to me which made for an interesting game experience, particularly near the end of the game.

We happened to be sitting in the endzone where the winning touchdown was scored which also made for an interesting episode. Of course the crowd was going nuts as the Cowboys came down the field and when they scored the TD I just put both of my hands in the air and was screaming “YEAH!!!!” As I was doing this the my buddy on my left, Andrew, gave me a low hug and then my buddy on my right, Jeff, gave me a low hug…and then the guys behind me joined in on the hug…and then the guys in front of me joined in on the hug…I just kept my arms up and kept cheering!

There was still time left and so Detroit took the kickoff and began their attempt at a comeback drive of their own. As they were doing so the Cowboys sacked their QB and caused a fumble. As this happened the crowd erupted which also caused the two guys from Detroit to put the hands in their heads dejectedly. As this was going on everyone stopped watching but kept celebrating. Then all of a sudden the two guys from Detroit were up and cheering! But why?! Well, if you don’t know the young player from Dallas who recovered the original fumble…fumbled the ball himself…right back to the Lions! It took about 30 seconds for everyone to realize what had happened and why the Detroit fans were cheering, which in retrospect was kind of a humorous exchange…but I think you had to be there to really appreciate it!

In the end Dallas finally did get a fumble and everyone went home happy that night…everyone who is a Dallas Cowboys fan that is!