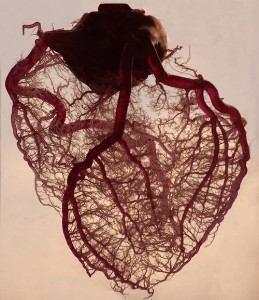 On April 5th 2013 I had a heart attack. There were three blockages in the two main arteries of the heart. One artery was considered 100% blocked. The two other blockages were at 70 and 80% in the artery sometimes referred to as “the widow maker” for what should be obvious reasons. While there would be some discussion of open heart procedures, in the end I had two stents placed. There was talk of a third but due to some complications it was determined that it was not necessary for now.

The reason I bring this up is not because I have been thinking about it particularly but in the last few weeks I’ve been asked by several people the not so unique or original question: did that experience change your life? I find it interesting that this question has been asked by a very disparate section of people in my life…young, old, peer, male, female, spiritual, and not so spiritual. I guess it’s an interesting fact that no matter where in your life you might be, if you slow down enough mortality eventually creeps in. Of course it’s a more pertinent thought as you get older. The youngest person who asked me is a particularly thoughtful kid.

There’s also a tendency to think that I may have gained some insight or wisdom from the ‘near death’ thing. The fact is that I did not see a white light or have an out of body experience at all. I was pretty much lucid the entire time and while it may have not really been the case I remember being the most calm person out of the bunch who were around me, other than the medical personnel. I wasn’t scared about any of it either. Part of it may have been shock, but I was also so tired by the time this all happened that I remember thinking that I could really use the rest that a good death could give me. When I went in for the first procedure I prayed for my girls and JennyG and then just gave it all up to God. I borrowed Jesus’ words and right before I went totally under I thought to God “Father, into your hands I commit my spirit.”

A week later I was back at home. It took about another week to get my feet back under me and by the end of the second week I was back at work.

Despite what Sam thinks, I’ve been eating better and smarter. I’ve lost a little more weight and lowered my cholesterol, although I intend to do more on both of those. I try to worry less about things and be more accepting of those around me. In a certain respect I’ve been thinking of myself more, which is conflicting for me…but I don’t worry about it. My cardiologist has been very impressed and encouraging of my progress. Spiritually I feel about the same…I believe as I always have…and will continue to do so. The journey continues and God is revealed in my life on a daily basis.

I don’t think too many people would consider me a survivor but I think that’s what I am. But then again I think we all are.